This novel recounts the senior year of a talented collegiate distance runner named Richard Dubin. Richard's competitive year is a roller-coaster of stunning success and numbing disappointment, and his life is complicated by a steamy relationship he enters into with a beautiful, but unpredictable woman 10 years his senior. Richard's university is one of the great party schools of the American South and the reader is treated to a series of uninhibited college bashes, featuring copious liquid consumption, naked kegstands, nude relays, and most daring of all, poetry readings! As the pressures mount, Richard's life begins to unravel. All the forces converge at the Olympic Trials in New Orleans and it is there that Richard the edge of the abyss.

About the author: Dan Middleman is a prominent American distance runner. In 1996, he made the US Olympic team in the 10,000 meters and was the #2 ranked American in that event. His 28:04.8 that year was the fastest US time for the distance. An elementary school teacher in Raleigh, NC, Dan is currently working toward a master's degree in behavioral disorders. PAIN is his first novel.

KICKR SNAP Smart Bike Trainer
The Wahoo KICKR SNAP is the KICKR for those who don't need as much kick. It shares the great features of the KICKR including power you can feel, app controlled resistance, and an open platform - all in a convenient wheel-on design. The SNAP is perfect for training for a long group ride or knocking out a century.

DUAL BAND TECHNOLOGY: Both ANT+ and BLE capabilities allow it to connect to both smartphones and GPS devices simultaneous or separately

SUPER STABILITY: Made from high strength carbon steel and featuring a wide stance, SNAP is designed to keep its feet firmly planted on the floor and your bike securely locked in so you can train with confidence.

RELIABLE POWER MEASUREMENT: Designed for consistent power measurement so that you can monitor and adjust your intensity. Accurate to +/- 5%.

CONTROLLED RESISTANCE: When connected to your device, it automatically sets your resistance via your favorite app or software

REALISTIC ROAD FEEL: High inertia flywheel engineered to replicate the feel of an actual rider on the road

MEASURES SPEED, DISTANCE, AND POWER: Get vital cycling metrics on your indoor ride. 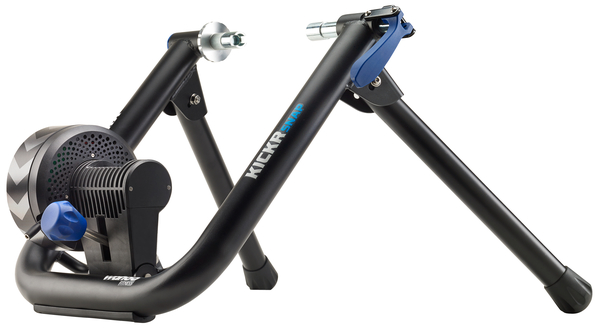